It seems like E. coli is everywhere. First it was in spinach, then it was in beef, now it’s in Sekiya’s Restaurant in Kaimuki.

According to the Honolulu Advertiser, the longtime Japanese eatery is shutting down after the worst outbreak of E. coli 0157:H7 in the state’s history.”

Hopefully it won’t be long before the restaurant meets health standards and the seven individuals affected by the bacteria are back to normal. 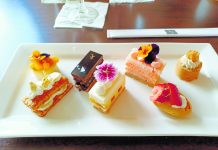