According to this article by Derrick DePledge in the Honolulu Advertiser, U.S. Daniel K. Inouye has written an apology letter to Punahou School for comments he made about U.S. Sen. and Punahou alumnus Barrack Obama.

Sen. Inouye, a superdelegate who is supporting U.S. Hillary Clinton, made these comments to the Advertiser about Sen. Obama before the Hawai`i Democratic caucuses last week:

“If you ask the people in Hawai’i what they know about Barack Obama, I think the honest answer is, ‘Very little.’ He went to school in Hawai’i but he went to Punahou, and that was not a school for the impoverished.

I don’t hold it against anyone who is a Punahou grad. It’s a fine school. I would say one of the finest in the United States. But to suggest that Punahou maybe set his life plan in place, I find it very interesting.”

Obama responded to those comments in an interview with KITV news:”Shame on Danny for trying to pull that stunt. I went to Punahou on a scholarship. I was raised by a single mom and my grandmother.”

Punahou’s president James Scott is planning on meeting with Inouye next week in Washington, D.C. 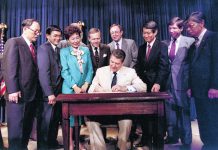 Political History – PAT SAIKI: “A WOMAN IN THE HOUSE”