Alton Takiyama-Chung, a former Honolulu resident who now lives in Portland, is bringing the story of the 100th Infantry Battalion and the 442nd Regimental Combat Team to the stage.

The 49-year-old actor tells the Oregonian’s Julie Sullivan that his two-man play (along with musician Mike Van Liew), “Okage Sama De,” is a collection of stories from World War II-era Japanese Americans. There’s even a performance video of him in the link.

These are stories of what it was like to be in internment camps and go to war or serve in the Military Intelligence Service as translators in the Pacific. It’s the story of Takejiro Higa, who was born in Hawaii, grew up in Okinawa and helped plan the invasion of Okinawa and what it was like to go to where he grew up carrying a gun, wondering if he was going to meet his uncle or his cousins. Or Chiune Sugihara, the Japanese consul in Lithuania, who wrote transit visas to allow Polish Jews to escape the Nazis. And the story of Solly Ganor, an 11-year-old Lithuanian Jewish boy who survived Dachau and was rescued by the 442nd at the end of the war.

“Okage Sama De”opens in Portland on Feb. 8, 9, 15 and 16. Takiyama-Chung says he plans to come back to Hawaii for the 65th reunion of the 442nd Regimental Combat Team. 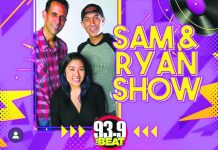